Despite his young age, Zheng Huifa has a rich experience. Since he went to Guangdong alone at the age of 17, he has done a variety of professions, experienced the joy of success and the bitterness of failure.

Beginning in 2000, he plunged into the food machinery industry, after years of development, the quanzhou days send (tianshun) food machinery co., LTD. (hereinafter referred to as the "day" "tianshun") has a fixed assets of 70 million yuan, the annual production capacity of 3000 / set, become a set design, research and development, production, sales as one of the large food machinery corporation,Little fame in the industry.

In the eyes of others, this process is smooth sailing, in fact, only Zheng Hui Fa himself the frustrations of the most understand.Some people say that he is experienced in running businesses, but in his own words: "All my experience is from experience." 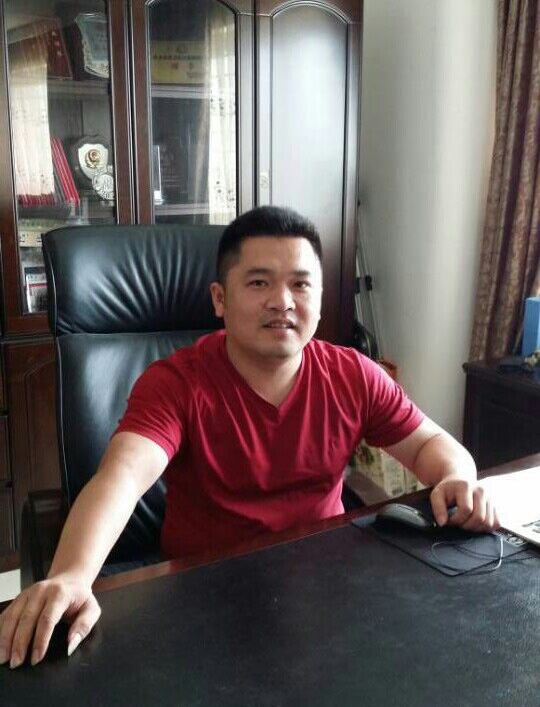 When I first entered the business world, I lost a hundred thousand families

In 1996, after graduating from junior high school, Zheng Huifa took hundreds of thousands of yuan from his parents to start his own business in Guangdong.

At the beginning of his business, Zheng knew nothing about many things and had no serious planning.He first sold a section of slippers, and soon turned to electromechanical, Zhejiang sales of an enterprise's pumps, blowers and other mechanical and electrical equipment.

The beginning of the business is good, but once because of the quality of the product out of the problem, so that Zheng Hui Law Gang's business "hit the pot".

At the time, a customer bought 10 pumps at a time, a rare big customer for Mr. Zheng.But the product is sold not long, the customer reflects the quality problem, the request returns money, zheng hui law contacts the manufacturer, but the manufacturer does not care.Helpless, zheng hui law bears the loss by oneself only, the road of distribution that this just starts to him soon is undoubtedly a fatal blow.

Subsequently, zheng meeting law gives an enterprise to sell on a commission basis soybean milk machine again, on a commission basis sells not resemble oneself to distribute in that way, do not have autonomy, the production enterprise wants the money that deters one part of you, profit also wants much lower.What made Zheng Huifa's headache even worse was the competitive pressure from another dealer nearby. They were local people who owned the house and did not have to pay rent, so they kept the price of the machines very low, earning 5 yuan per unit. But for Zheng, the price was too high to pay the rent.So before long, Zheng's business attempt failed again.

More than a year later, Zheng Huifa lost all of the more than one hundred thousand yuan he had brought to Guangdong.Father called him back to Quanzhou, said it is not in Quanzhou to help him open a local store, slowly doing. 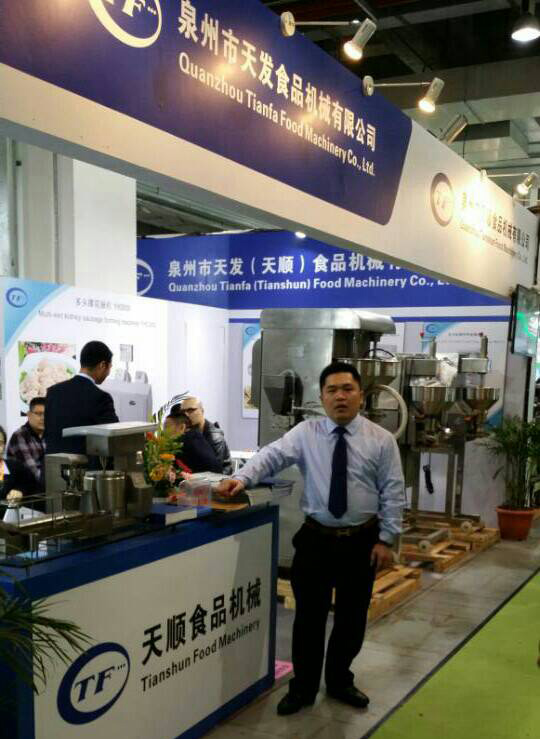 2, sales of food machinery to earn 33 yuan a day

Zheng Huifa's parents were machinery dealers before, and he was good at it.

In the second half of 1997, Zheng Huifa returned to Quanzhou and opened a store with the help of his parents, still selling a variety of small food machinery."I didn't have high requirements at that time. I rented 1,000 yuan a month and set a goal for myself to earn 33 yuan a day, almost breaking even."

Engage in distribution will inevitably meet debt, go out to account Zheng will become a daily meal of law.Once a customer owed more than 2000 dollars, Zheng will law when the other party said no money to account, to the two machines, Zheng will law did not think much agreed.

Zheng Hui law does not know the price of the two machines, after returning to Quanzhou, each priced more than 1000 yuan to sell, thought as long as can make up for more than 2000 yuan of debt can be.

But to his surprise, the two machines were sold out quickly, and the customer did not bargain after asking the price, and paid for them directly.Zheng will law feel very strange, to a few mechanical stores of quanzhou city turned, so the price of others mark of this kind of machinery is 1900 yuan above.

Zheng Huifa thought this was a good business opportunity, so he contacted the manufacturer of this machine according to the information on the nameplate of the machine, and he wanted to act as an agent for this machine."Others sell it for 1,900 yuan, but I sell it for 1,300 yuan."Zheng Hui law told reporters that the principle of small profits but quick turnover so that his machinery sales business is doing better.

But just as Zheng's business was booming, his sales suddenly dropped. He found that many customers would rather buy his 1,900 yuan machine than his 1,300 yuan one, because their equipment had no after-sales service and could not be repaired for customers.

Discovering this fatal defect, in the first half of 1998, Zheng Huifa teamed up with a cousin who knew how to repair and set up a maintenance department, which was responsible for after-sale and maintenance of the products.In the second half of 1998, on the basis of the maintenance department, Zheng Huifa invested in the construction of his first factory. Although the main business of the factory is to do mechanical maintenance, occasionally he also produces some mechanical equipment by himself.For entering the food machinery industry, Zheng Huifa felt that from this factory, "I really started my own business".

In the first year of entrepreneurship, the factory was flooded, and the heart of suicide was there

Zheng Huifa's factory began to slowly get on the right track. By 2000, he named the enterprise "Tianshun", hoping that the future development could be smooth, but he did not know that the weather is unpredictable.

May 9, 2000, Zheng Huifa received a relatively large order, if the business can be successfully completed, the development of the enterprise can be on a new level, so he did very seriously.At that time, the contract agreed that the goods would be delivered one month later. Zheng Huifa led the workers to work overtime and finally the machine was produced on time.But two days before the delivery was due, a nearby reservoir caved in, flooding the factory and all its equipment.

"I wanted to kill myself."Zheng Huifa said that at that time, he had just started the production of food machinery, and this sudden blow made him almost unable to accept it. Originally, the annual sales were more than 300,000 yuan, and the net profit was 60,000 or 70,000 yuan. However, the single business lost a penny, and when the end of the year was settled, he found that he had not earned a penny and had worked hard for nothing for a year.

Today's Tianshun factory, located at the foot of Qingyuan Mountain on the outskirts of Quanzhou, is the fourth site of Zheng Hui's transformation.Qingyuan Mountain is a famous scenic spot, one of Quanzhou's 18 scenic spots. "This place has good feng shui," Zheng said with a smile. "At least the terrain is high, so the factory won't be flooded any more."

In Fujian, the production of hot pot material enterprises are very concentrated, they have a great demand for meat slicer, beater and such equipment, and Zheng Hui Fa is also from these equipment started, formally began the research and development and production of food machinery.

Before long, another customer, said that ready to open a small factory production balls, want to buy a beater.But Zheng Huifa's existing beaters are small and can only beat a few kilograms at a time, while this customer wants one that can beat 50 kilograms at a time.

No, I did it by myself. However, in practice, Zheng Huifa found that it was far from as simple as he imagined.Although after several twists and turns in the end, the customer needed the equipment was produced, but this also let Zheng Huifa deeply realize the importance of technical personnel.

The idea of hiring a technician haunted Mr. Zheng until 2002, when he finally got his wish, hiring a senior engineer from Taiwan, whom he described as his "benefactor."The arrival of the engineer, so that Zheng Hui Law's equipment research and development has a huge improvement.Beater in technology has been a constant innovation, the current launch of the model, each time up to 400 kilograms, became Tianshun's fist products.

In addition, it has successively launched dozens of food machinery series, such as meat planer, chopping mixer, fish ball forming machine, package machine, etc., which can undertake the design and production of all kinds of meat products and fish products, with an annual production capacity of 2500 sets/set. 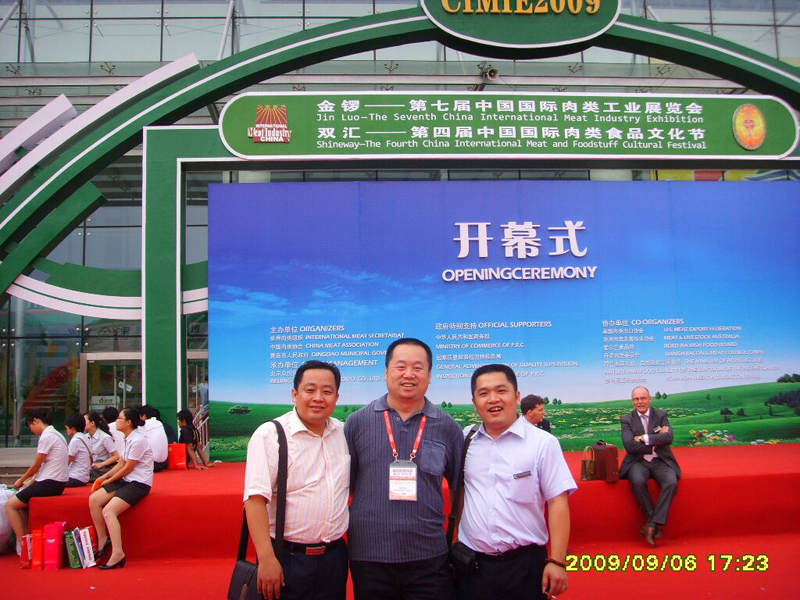 Until now, Zheng feels that his education is too low, all the experience is from the experience of grinding out.Therefore, it has become a consistent tradition of tianshun to attach importance to technical personnel. At present, tianshun has more than 150 employees, including 10 senior technical research and development personnel and 8 senior title personnel.

In May this year, Zheng Huifa went to Frankfurt to attend the German International Meat Processing Industry Exhibition, which is held every three years. By comparison, he felt the gap between domestic and foreign companies and understood his position more clearly.

"Take the control of mechanical equipment, for example, foreign are generally touch screen, fully automated, the middle does not need any manual."Zheng Huifa felt that foreign food machinery high-tech content, high added value is also difficult for domestic enterprises to match, in foreign countries, a dozen people of the "small workshop" type enterprise, the annual output value will reach tens of millions, or even more than 100 million, "and our enterprises are one or two hundred employees, the output value is not as much as others.

After coming back from Germany, Zheng Huifa set a goal for himself in his mind: three years later, he must carry the self-developed products to Frankfurt.

The most important thing to make equipment is to produce new products, and the most important thing to produce new products is to rely on technology. For this point, Zheng Huifa knows better than anyone, so now he has started to recruit senior engineers and hand over the materials brought back from abroad to technical personnel to study and learn.Recently, zheng huifa also revealed to reporters that he is ready to divide out a part of tianshun shares, to have rich experience in research and development of technical personnel, so that they can become technical shares, in order to attract more talent.

"Planting a plane tree will win a golden phoenix."Zheng Huifa said that at present, Tianshun is in a period of rapid development, the annual output value is doubling the growth, he believes that the enterprise's huge development space can attract a large number of technical personnel, so it can promote the steady growth of Tianshun.